On September 16th the Local Government Association put out another of its many press statements, this time about home education and illegal schools

The LGA describes itself as the national voice of local government and it is not difficult to see why local authorities have asked the LGA to say something. Much of the media focus has been on asking for “more powers” with regard to home education, because that’s a simpler story to put across, but the actual Press Release deals substantially with illegal schools and LGA members are in a very difficult position with regard to Ofsted and illegal schools.

UPDATED SEPTEMBER 23 TO ADD THAT THE LGA ALSO WANTS TO RETAIN POWERS OVER ALTERNATIVE PROVISION WHICH THE GOVERNMENT INTENDS TO DEVOLVE TO SCHOOLS + link to Hackney inspection report.

Ofsted inspects local authorities’ arrangements for safeguarding children in England and blasts LAs for not doing more about illegal schools but in fact councils have  no power in law to inspect registers or check individual pupils’ timetables if the school won’t co-operate.

“Illegal schools” are schools which meet the criteria for registering as independent schools but where the proprietors have opted NOT to register.

Schools only have to register if they are full time and there is no legal definition of full time although the Government has given 18 hours a week as a guide.

It is only Ofsted which can go in under section 97 powers and check to see if the place where children are being educated meets the threshold for registration as a school.

Much of the investigation of whether a school is full time (and therefore subject to registration and inspection) hinges on the timetable for an individual child, and not on how many hours the school is open.

Historically the Government has been reluctant to prosecute or to shut schools down, preferring instead for schools to be supported through the registration process. Sir Michael Wilshaw, current head of Ofsted disagreed vehemently with this and piled on the pressure until finally in December 2015 the Government gave Ofsted the go ahead to investigate and collect evidence against unregistered independent schools and to liaise with the Crown Prosecution Service.

The Press Release issued by the LGA  is very fuzzy on details, calling for “a clearer definition of a “school” to make it easier for Ofsted or the Department for Education to classify and close down illegal schools when they are uncovered”  adding  “we also need to know that where there are concerns, the right regulations are in place so that Ofsted and the Department for Education can close illegal schools swiftly.”

The Government reaction focused on illegal schools and sidestepped the issue of any changes to home education regulation. 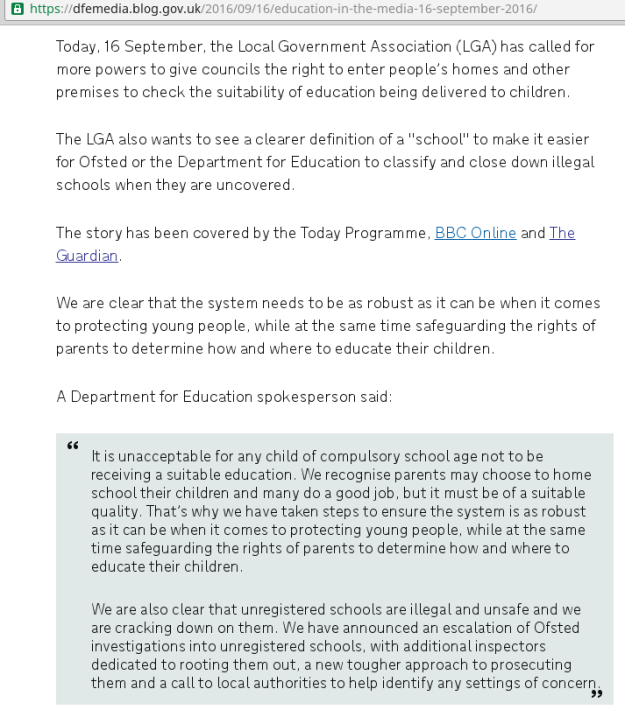 The other element of the LGA Press Release is a call for action to “prevent children from ‘disappearing’ from the oversight of services designed to keep them safe.”

It is concerning that the LGA appears not to be aware of new duties and powers to track children coming out of school which were introduced on September 1st 2016.

Many of the unregistered schools are in London and the LGA spokesperson is from Islington which is is overdue a no-notice Ofsted safeguarding inspection.

Click here for a list of councils which have yet to be inspected for safeguarding or which have been rated inadequate and are subject to quarterly monitoring visits from Ofsted) UPDATED SEPTEMBER 21st 2016.