The most important features of this Bill are:

There are two main types of Bills in Parliament:

(“Private Bills” are something different again. See this parliament page for an explanation of the types of Bill)

These are the ballot results for June 2017.  The Home Education Bill was drawn at number 9 which meant that it had its First Reading on June 27th alongside a raft of other Private Members Bills.

A grand total of 61 Bills are on the 2017 list for the Lords. This is a higher number than usual,  probably because some of last year’s Bills which ran out when the General Election was called have won a place on the ballot to be started for a second time (and in at least one case started for the third time.) A batch of Bills are to be slotted in every day up to the parliamentary recess. 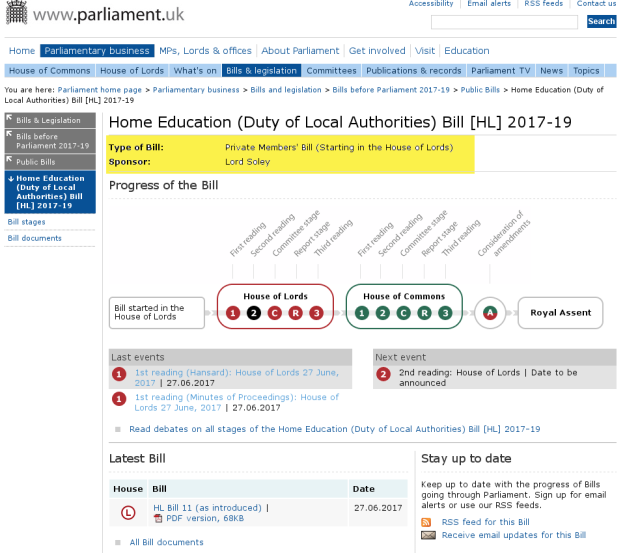 Progress of Private Members Bills Introduced In The House Of Lords

Only 2 Bills out of 50 made it through the House of Lords, neither of which got past First Reading in the House of Commons.

Stages Of A Bill

The stages of a Bill are set out here and comprise First Reading, Second Reading, Committee, Third Reading, Report in the ORIGINATING House (Commons or Lords) FOLLOWED BY the same in the OTHER House (ie going through all the same stages in the Commons if started in the Lords and vice versa)  None of the Private Members Bills introduced last year in the Lords made it past the very first stage in the House of Commons.

There is no specific time in the House of Lords which must be set aside for Private Members Bills to be debated.  In practice these debates usually take place on a Friday. and  a Bill which has a substantial number of amendments tabled might struggle to find space or as this briefing puts it “the tabling of amendments to private member’s bills may also have an impact on their ability to progress.”

The Home Education (Duty of Local Authorities) Bill [HL] 2017-19 has been tabled by Lord Soley who displayed an interest in home education a few years ago, see here  and here although he was not available to present the Bill himself.