On June 20th 2017 the Scottish Government introduced the Children and Young People (Information Sharing) (Scotland) Bill – June 2017 [LINK] which modifies the Named Person duty following the 2016 Supreme Court ruling on information sharing. Here is a quote from the Explanatory Notes

You can find how far the Bill has progressed by clicking here. The Bill will now go through Stage 1 which is explained here.

In June 2017 the Scottish Parliament Education and Skills Committee put out a Call for Evidence to members of the public and interested parties.  The deadline for written submissions is 5pm on 25th August 2017

The bill then undergoes more detailed “line-by-line” scrutiny, either by the appropriate Committee, the whole Parliament, or a combination of the two. Amendments (changes) may be made at this stage

Once a bill has been passed there is a four week period when the bill may be challenged by the Advocate General, the Lord Advocate or the Attorney General or by the Secretary of State for Scotland.

After the four week period has expired the Presiding Officer submits the bill for Royal Assent. Once the bill receives Royal Assent it becomes an Act of the Scottish Parliament

This page has a link to all the current supporting documents 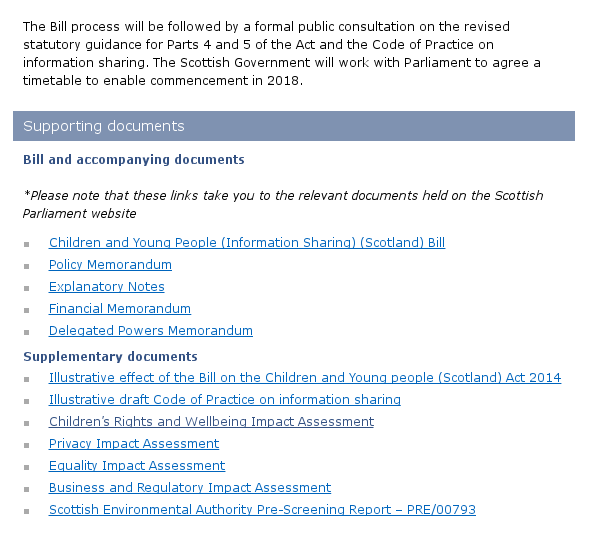 Lesley Scott from Tymes Trust has raised concerns that John Swinney may seek to use the case of Liam Fee inappropriately in relation to the new Bill.

No2NP has commented here  that “The new proposals confirm one of the most remarkable, ignominious and expensive U-turns in the history of the Scottish Government and a huge victory for mums, dads and children across the country and the 35,000-plus NO2NP supporters. They have now been forced to accept that their original draconian Big Brother proposals were an utter shambles from the start, representing an interference in family life and a fundamental breach of European human rights laws on privacy and information sharing. In effect they say the duty of a Named Person will be to consider whether sharing information is likely to promote, support or safeguard the wellbeing of the child or young person. They must also then consider whether sharing that information would be compatible with data protection law, human rights law and the law of confidentiality. That’s a 100 per cent climbdown on their original plan of a statutory duty to share information about people’s private lives almost without restriction. If they’d only listened at the start, they could have saved huge amounts of time and money. They now have to retrain those who have already been trained to implement an unlawful scheme.”