This blog post analyses what is currently happening with  LAs rated inadequate by Ofsted. 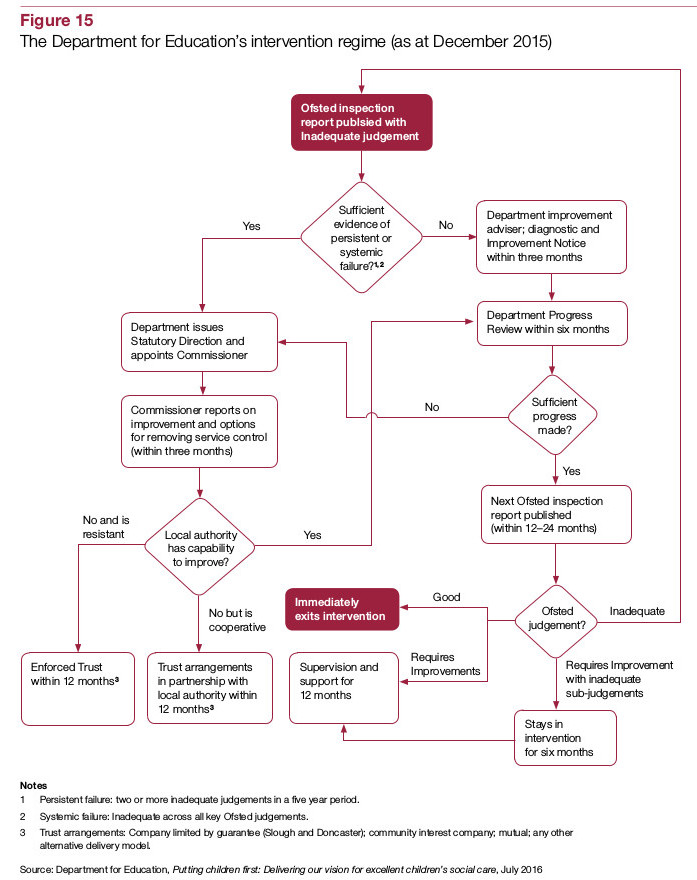 Demos calls this “externalisation rather than outsourcing.”

This is the hierarchy of possible intervention, the right hand side of the flow chart deals with “improvement” while the left hand side is about “direction.”

This is the more radical option.

The first query is “sufficient evidence of persistent or systemic failure.” If the answer is “YES”, then the Government issues a statutory direction and appoints a Commissioner to assess whether services should remain with the council.

(IF on the other hand the Commissioner rules that the authority DOES  have capacity to improve, then the LA will move onto the right hand side IMPROVEMENT track.)

In the first instance, IF there is not “sufficient evidence of persistent or systemic failure” then the right hand side of the flow chart applies. (A local authority may also be moved onto the IMPROVEMENT track if it is assessed as being capable of improvement after persistent failure.)

There will be a Government-appointed Improvement Advisor (who may be an individual or a company) who will work with the council. Although this is not spelled out in the NAO flowchart, there is generally an Improvement Board which may be instructed to appoint an Independent Chair.

A diagnostic review will be carried out within 3 months and within 6 months there will be a report to the Government. IF sufficient progress has been made, then progress must be maintained and will be assessed at a subsequent Ofsted inspection (which is not the same as  a quarterly monitoring visit) The outcome at the re-inspection stage will depend on whether the council is rated good, requires improvement or inadequate.

IF on the other hand, sufficient progress has NOT been made within 6 months, then as per the December 2015 statement, the council will be moved to the left hand side of the flowchart which deals with statutory DIRECTIONS.

I will now try to assess where each LA fits in the above flowchart, based on information already in the public domain.

Rated inadequate by Ofsted in December 2021

204 thoughts on “Intervention Level In Authorities Rated Inadequate by Ofsted”